A couple of recent site visits in Somerset

Stayed at a good site? Or a really poor one? And what about wild camping? Put your comments here.

A couple of recent site visits in Somerset

Over the last 2 bank holidays we have visited a couple of campsites in Somerset, the locations and sites were related to other stuff (visiting people in local area and going to a gig) rather than being specifically chosen for just a pure trip away in the Bongo. Both sites are very child friendly, so as we didn't have any children visiting us they wouldn't normally have been our first choice..

First one we went to Bank Hol before last was Petruth Paddocks in the Cheddar Gorge: https://www.petruthpaddocks.co.uk

Really nice, quite large friendly and relaxed site. If, like us, you don't require EHU you are free to pitch up where you like - we were directed to an area where there weren't any kids. We took advantage of their offer of a firepit and wood which they deliver late afternoon - cost £11 I think. There was a mobile wood fired pizza van that showed up and if I remember correctly a coffee stall. We didn't use either but both smelt nice! Was a short walk into the village where there were nice pubs etc and obviously the gorge area itself which is pretty impressive. If you have kids it looked like it was a good place for them, there was an old jeep for them to play on etc and plenty of room to run around. Like I said before, we would usually go for adult only but circumstances dictated otherwise for this stay. Even so, the site was big enough that the kids didn't annoy us and we didn't annoy them!

Bank holiday just gone and we were at Field 725 Camping in Frome: http://field725.co.uk

Smaller than PP but very similar relaxed vibe with firepits etc, bit more of a trek into the town and it seemed that you had to walk down a country road for a fair amount of it, so needed your wits about you. This one marketed itself as an 'Eco' campsite - which I wasn't 100% sure about really. I think as this eco label grows there needs to be a standard applied with a certificate, otherwise there is the danger that they just put in a dodgy loo and call themselves an eco site. This one suffered from that a bit - the toilets put me in mind of Japanese POW torture chambers, just 2 x cubicles, raised up off the ground with corrugated see through plastic roofs, a real hot box when the sun was beating down. I wont go in to the mechanics of how it worked but it involved sawdust and no water, was pretty smelly as well. Not that well thought out: to keep the smell out, the instructions said to close the door after use but this meant you had no way of knowing whether it was in use or not (which is often was, there being only 2) so you would climb up the stairs, find it locked and then have to do the walk of shame back down again. The urinals was simply a trough filled with charcoal.. No evidence of any renewable energy in sight and there appeared to be mains supplied water for washing and showers with no grey water re-use. The shower seemed to be mains supplied with an old power shower type arrangement. So not so much eco as normal with rubbish toilets.

Apart from that though - still a nice stay with good vibe. Both sites were about £20 per night. 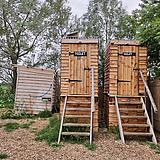 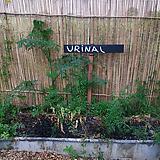 Re: A couple of recent site visits in Somerset

I've rather thought that the new 'Eco Sites' are what we might call 'Basic' but four times the price.

No doubt a few will sleep better thinking they are saving the planet by paying to pee in the hedge.

Re: A couple of recent site visits in Somerset

Yup, I think you're right Bob. Forgot mention that this site is also a 'Glamping' site: Not sure where a hellishly hot and stinking toilet fits in the whole glamping experience!?